Using VR we wanted to explore and break the 4th wall of virtual reality with the Oculus Rift. I worked with 2 developers as the lead interaction & game designer to concept, design and develop a local, asymmetrical, multiplayer experience.

BOO VR is a game where you can play as the Grim Reaper in VR mode to collect the souls of the undead or as the Ghost Master on the desktop to deploy your hordes of ghosts on the unsuspecting Reaper in a top-down real time strategy interface.

Despite the growing platform, accessibility for users and developers alike to try virtual reality in a more social context remained sparse. At the time of writing (2017), we have yet to see that leap beyond the more commonplace solo individual experiences to something more social.

Therefore something we wanted to explore more deeply in the concept and development of BOO, was to tackle this 4th wall that seemed to be a major friction point for more accessible virtual reality engagement.

Although VR provides a higher degree of immersion, it can also be isolating. Instead we approached the project from a place of how might we engage in the interplay between multiple players and spectator audiences.

The Opportunity: How might we break down the 4th wall of virtual reality gaming?

Identifying and subverting the spectator view

Since we only had access to one VR headset anyways, this challenged us to look into other ways to design a multiplayer experience that shifted away from traditional multiplayer game play models and towards an asymmetrical one.

Throughout our research what seemed like an untapped potential at the time was that most VR headsets were tethered to a PC- yet the PC monitor was only used to cast the VR view. We decided to leverage this untapped interface to accommodate an additional player to create a local multiplayer experience without the technical constraints of networking.

Once we had established this direction it was all about looking towards the real world for examples. Sometimes the most mundane tasks could be gamified in delightful ways (ie. toast simulator). Any instances where people had to work together cooperatively or against each other competitively were sources of inspiration. 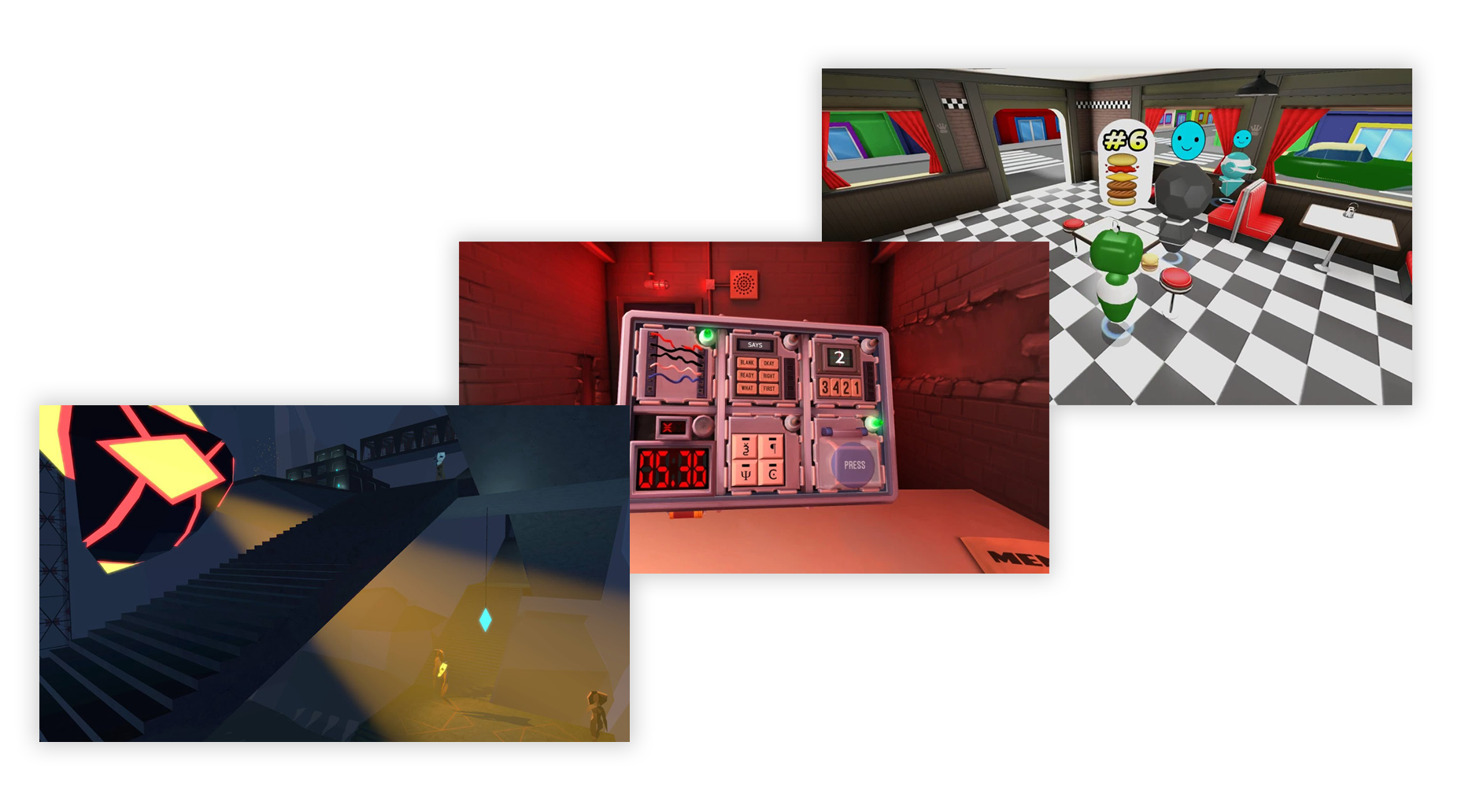 Innovative co-op games already existed on the market like Diner Dash, Panoptic, and Keep Talking and Don’t Get Blown Up. They demonstrated the potential for multiple players to play a game together with distinct but equally collaborative roles to accomplish similar or conflicting goals. We drew a lot of inspiration from this asymmetrical gameplay loop in the development of our game as shown below: 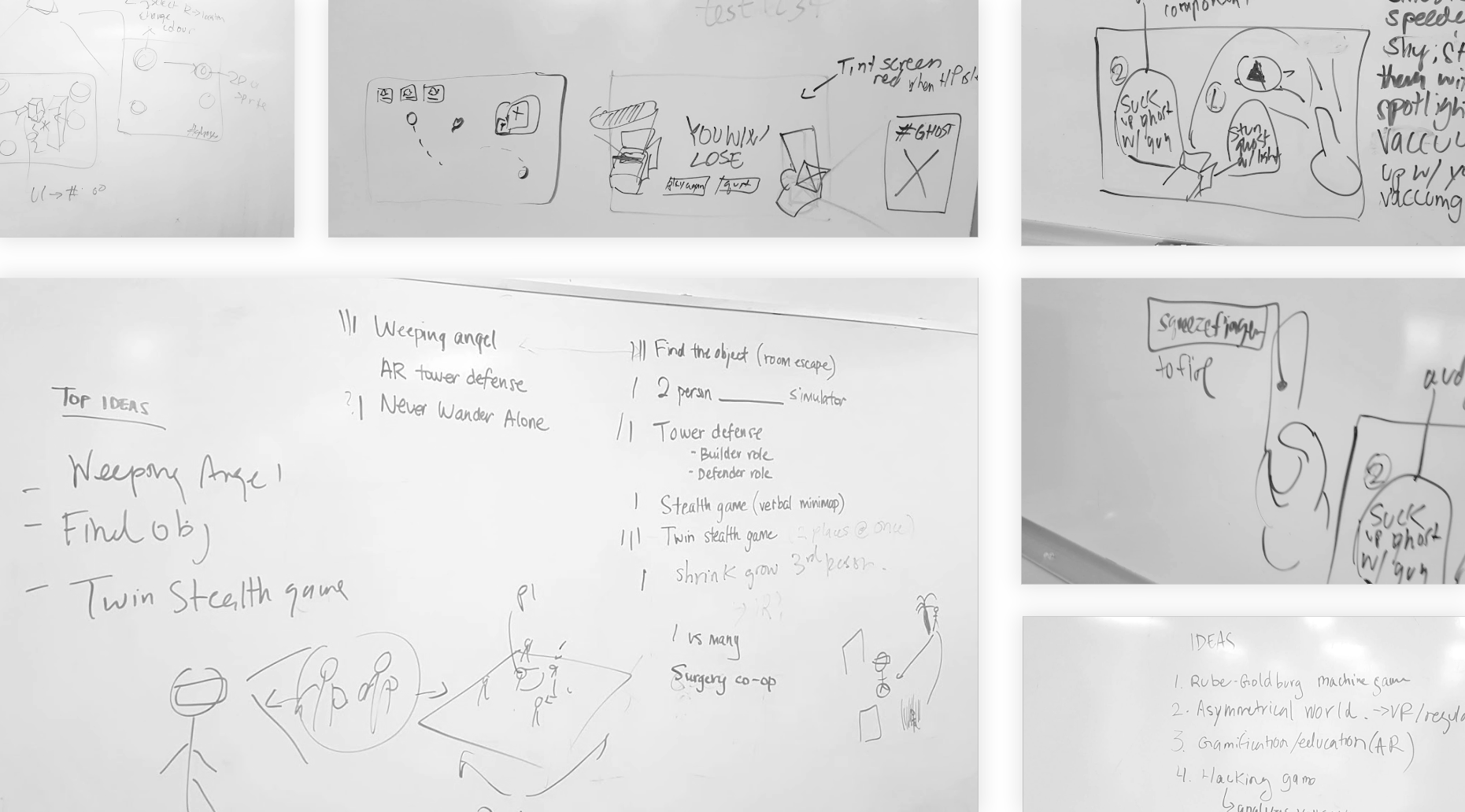 As we drilled down towards a zero sum/competitive experience, we brainstormed a level that was set in the liminal space of a graveyard and created two main playable characters; the grim reaper and the ghosts- each with their own distinct play styles.

As the Grim Reaper, you are equipped with a handy backpack, vacuum gun and flashlight to stun and suck up ghosts ravaging the cemetery.

As the Ghost master, you play in a real-time strategy format to control ghosts on the PC to attack and kill the Grim Reaper before you get killed.

The art direction was low poly and simple for a playful twist on a spooky survival game, as well as for performance optimization, where any latency would quickly unbalance the gameplay. 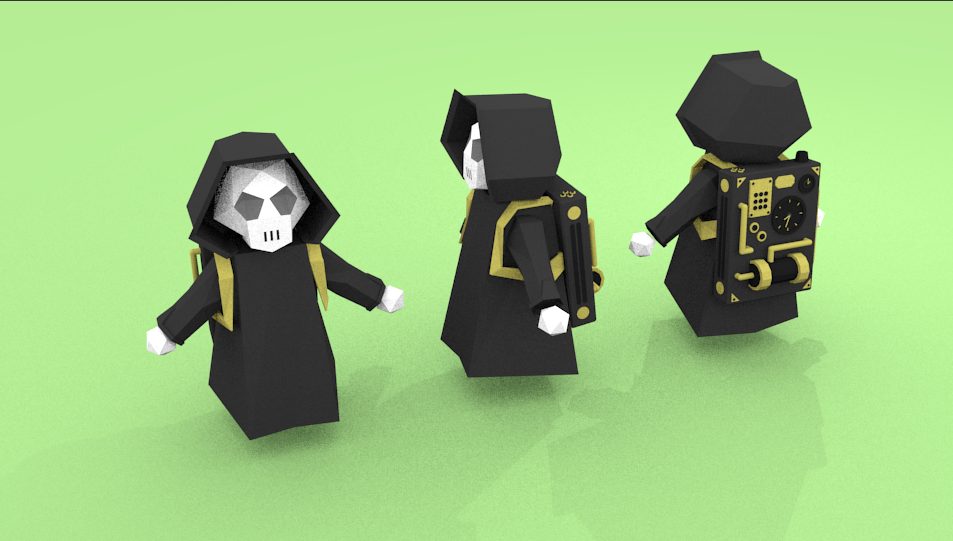 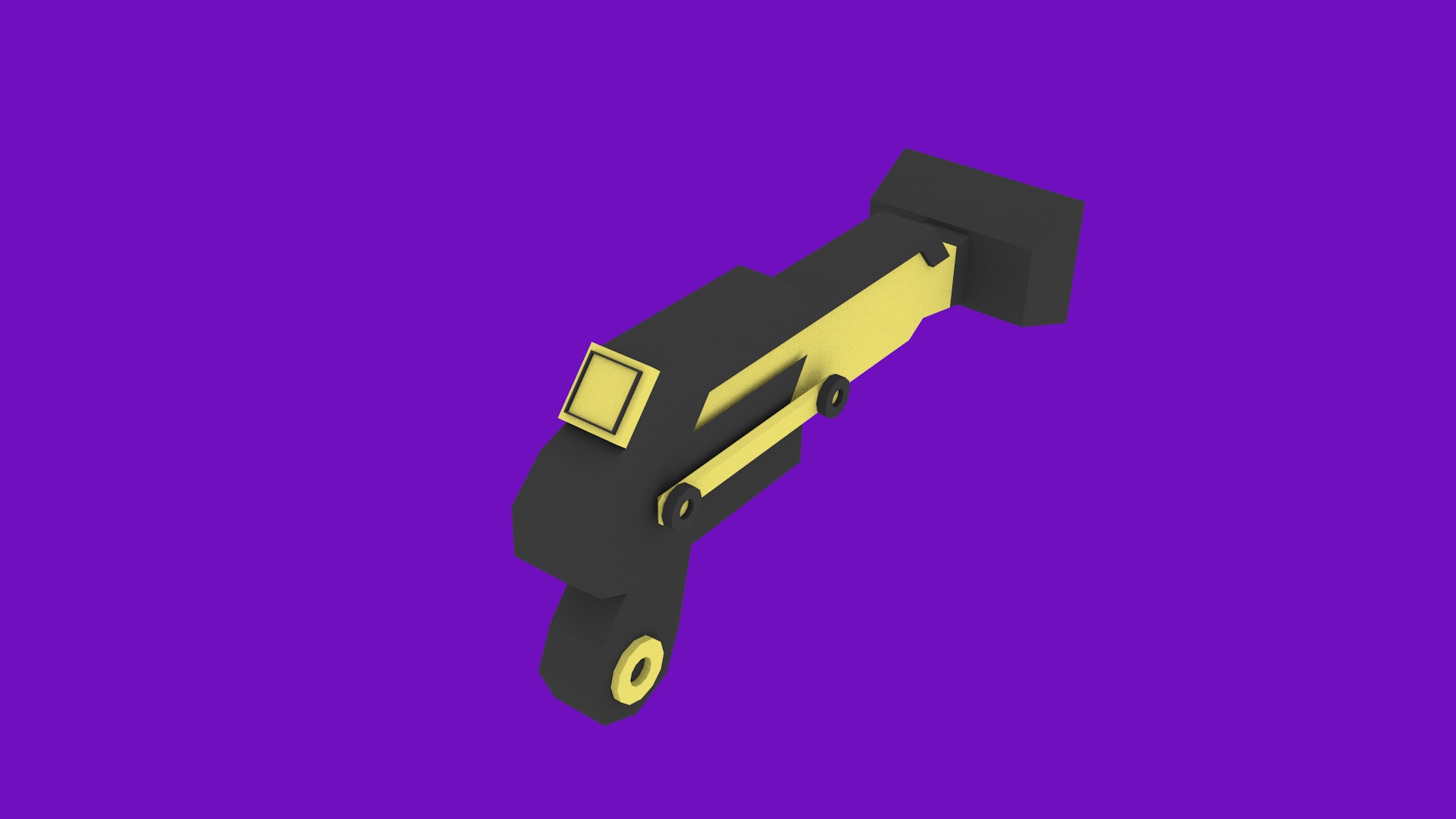 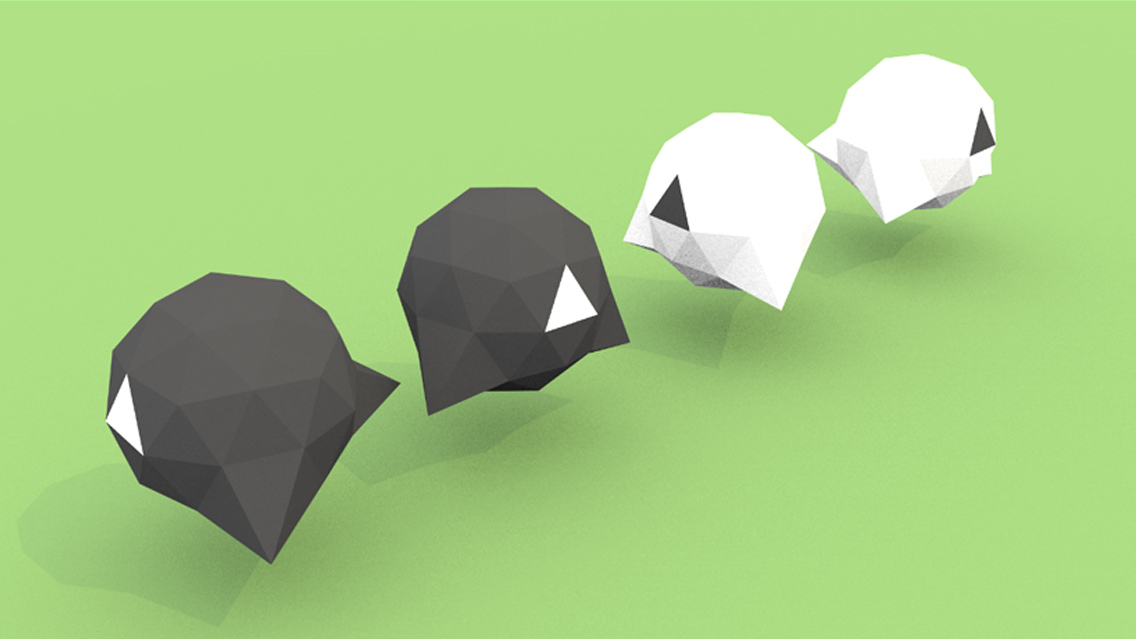 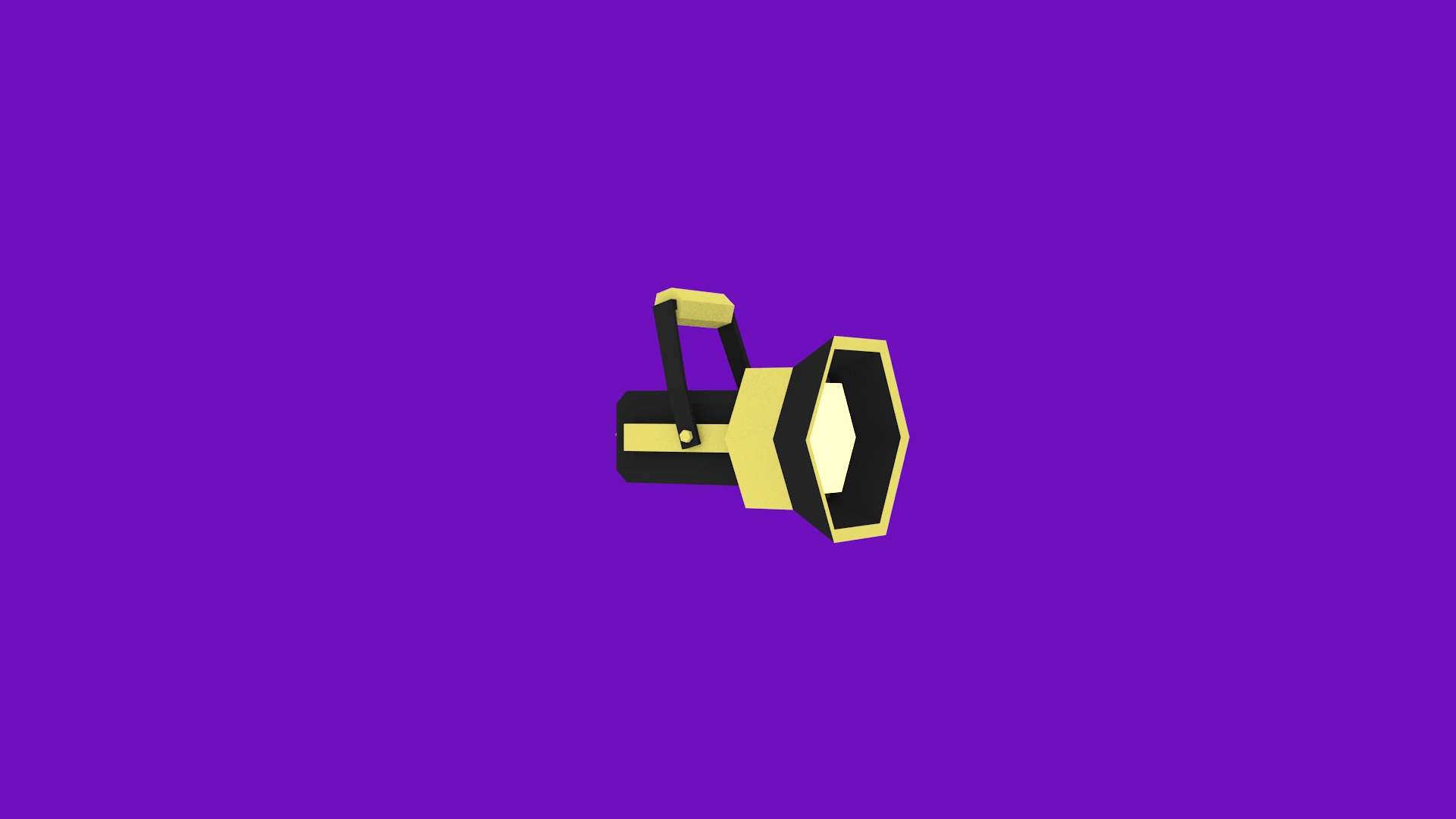 It was important to storyboard the major beats of the gameplay mechanics and align early on what the user interface would be at major points in the game.

Bold & easily digestible UI elements stood out in contrast to the darker and moodier atmosphere of the level to help aid players on how to react fast.

Due to the asymmetrical nature of the game, this doubled the complexity, but also created some interesting opportunities for on-boarding and teaching the mechanics to players early on.

I learned early on when designing for multi-player games with multiple modalities that storyboarding a 360 view of the game play experience shows what actions the desktop and VR player would do at each beat of the game loop. 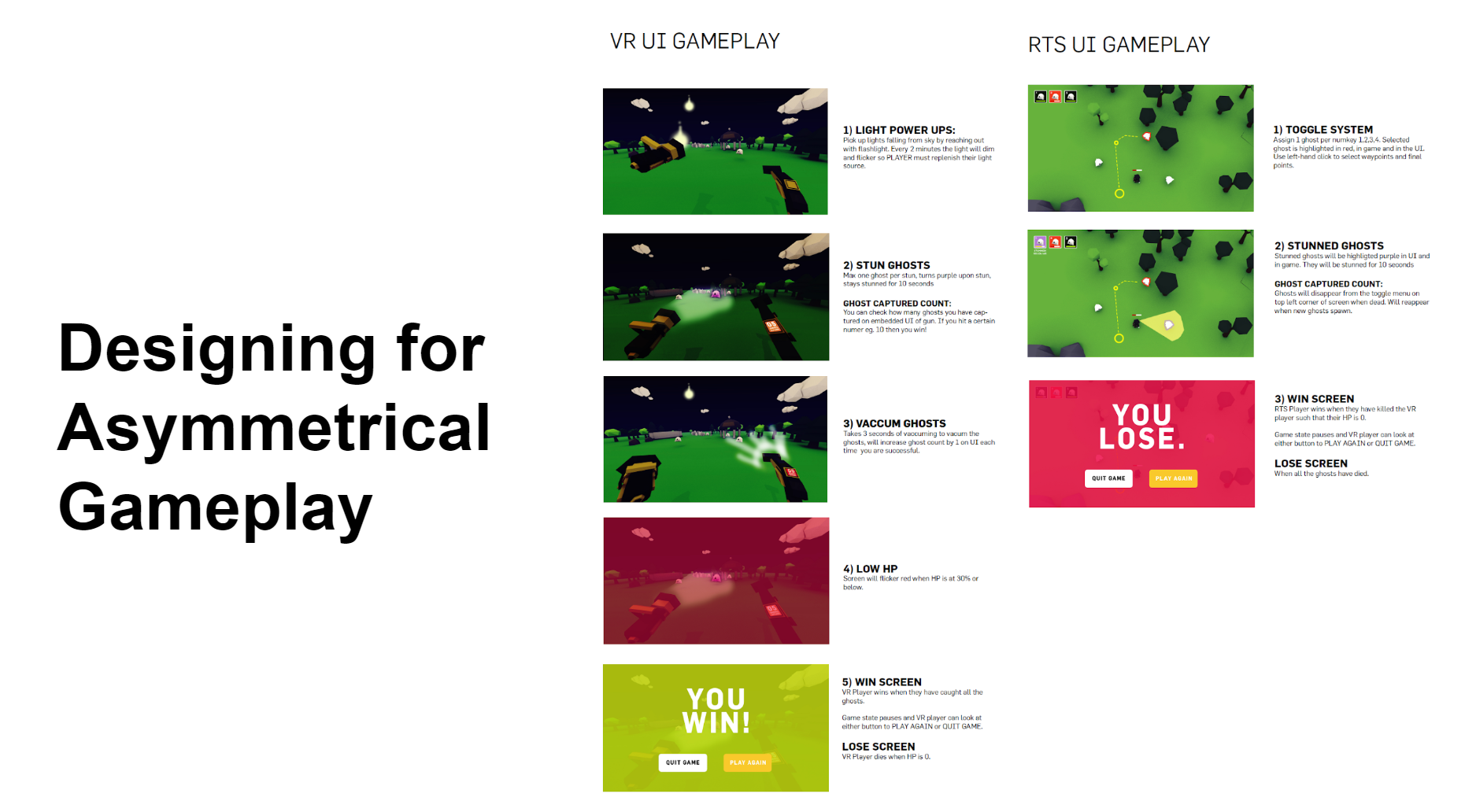 For onboarding we had 2 separate tutorials placed within a start menu that both players could go through and read while also trying out all the controls in a pre-loading area. 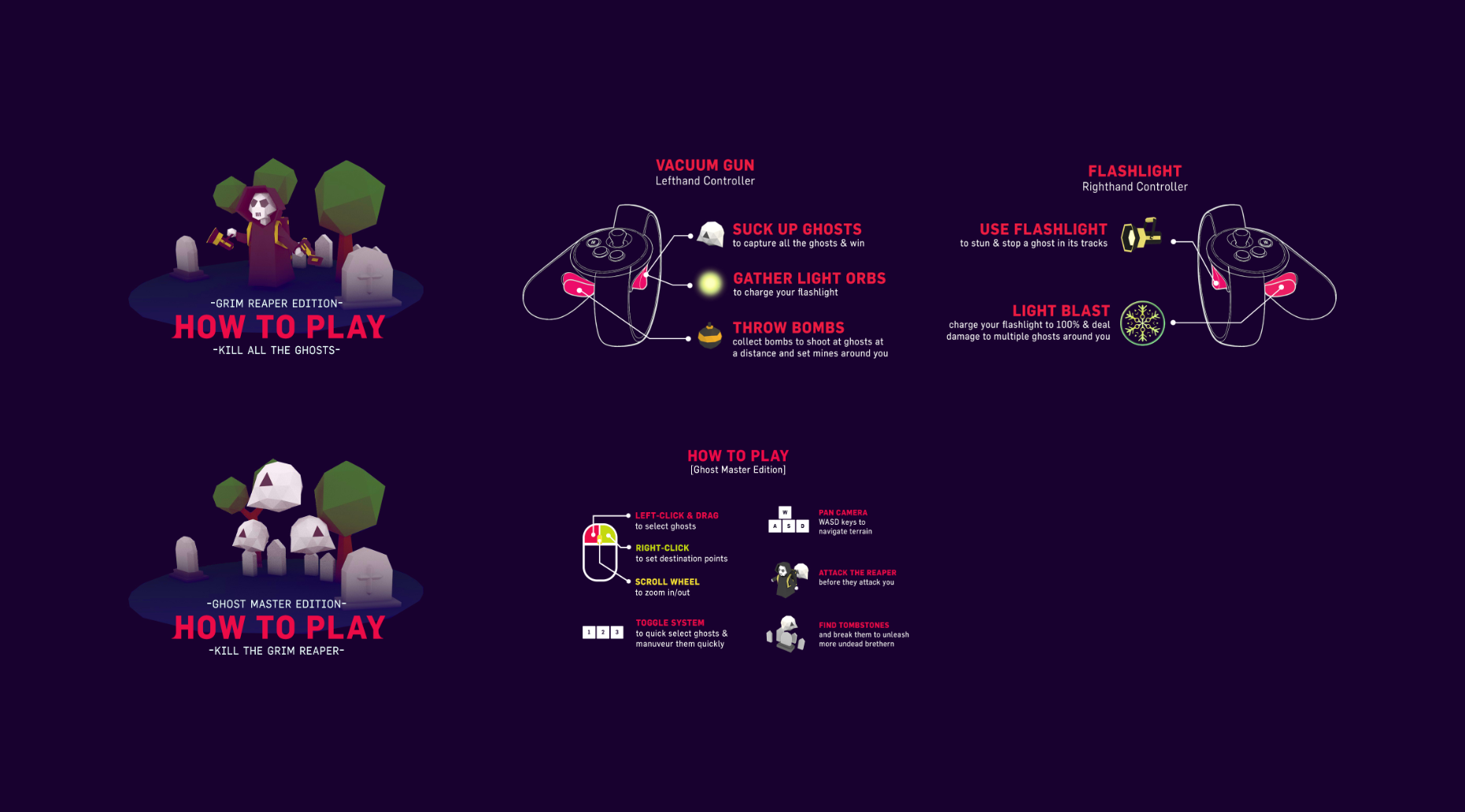 Locomotion: To move or not to move

The challenge of movement for the player in virtual reality was deciding between locomotion or remaining stationary.

Referencing Oculus best practices we experimented with moving with controller joysticks, being able to walk within a certain radius, teleportation and so forth. In the end it was decided to keep it simple by not moving at all- to minimize the risk of motion sickness and focus on other interesting mechanics to compensate for the VR player's lack of mobility.

This also meant changing the level design from expansive varying terrain heights that were more suitable to an open world context, to a smaller and more focused level with more deliberate obstacles for the ghosts to hide and strategic tombstones for re-spawn points. 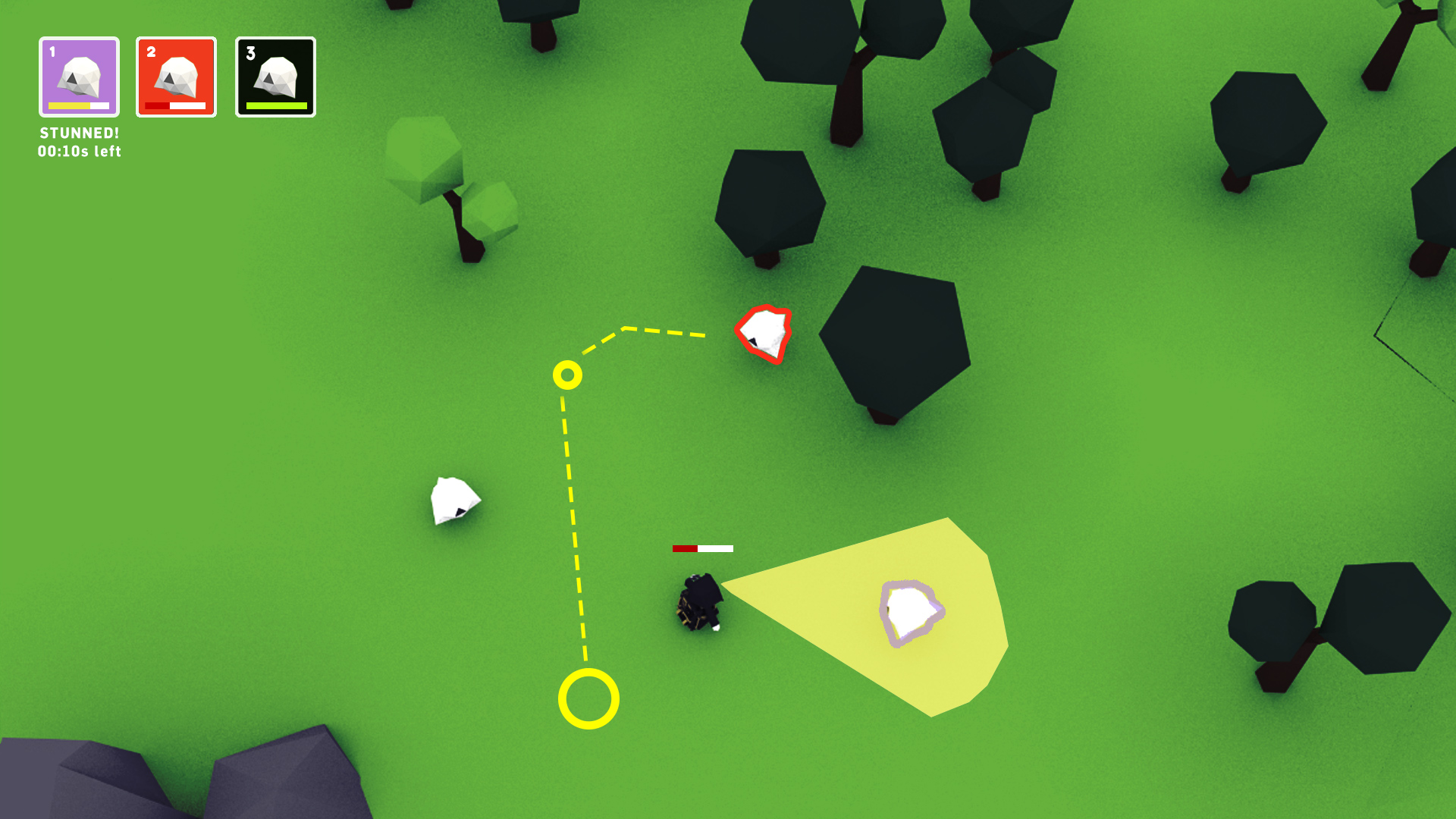 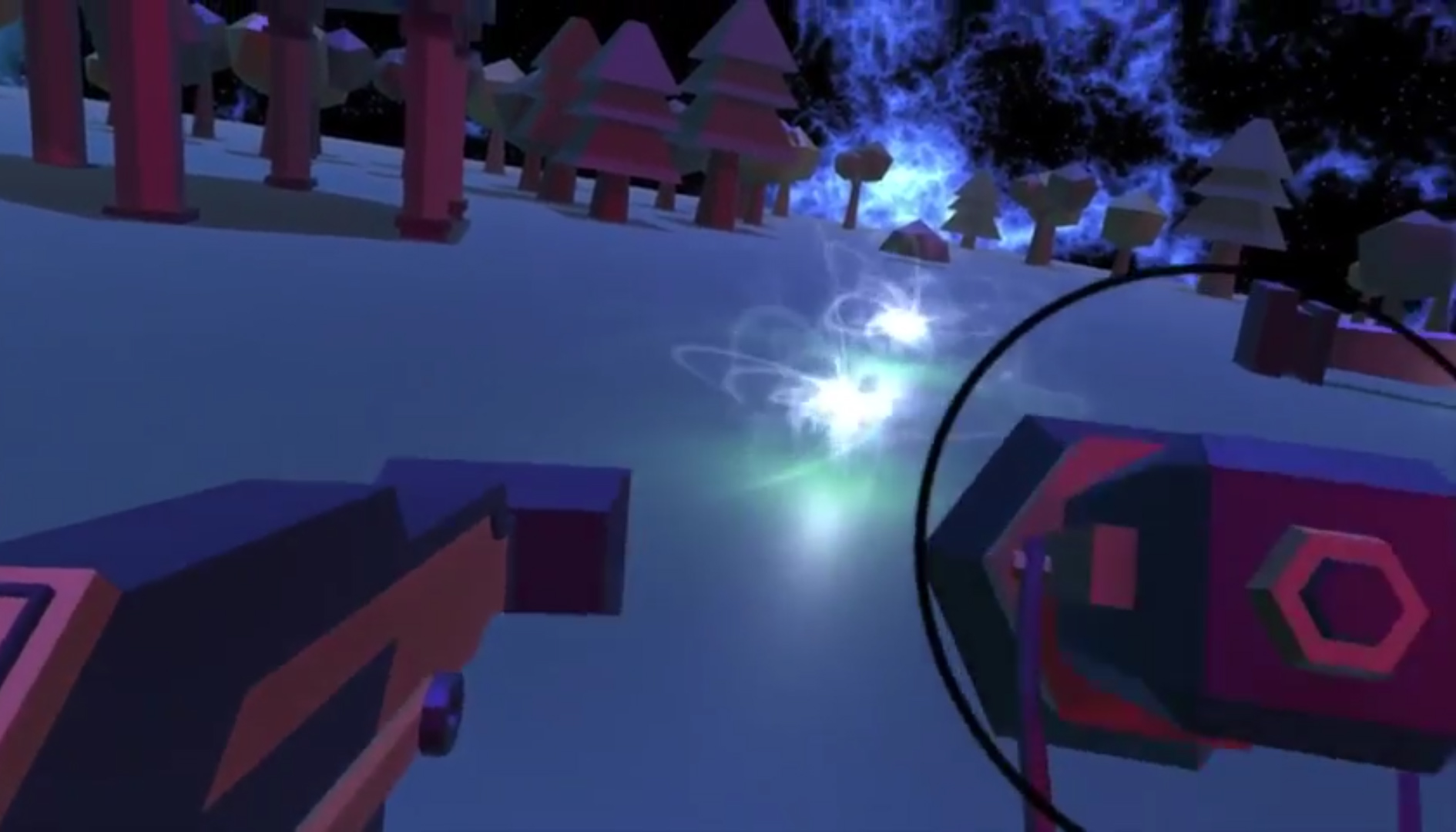 Throughout the 3 months of development we ran 6 play testing sessions. The first was a low-fidelity gray box level to tackle the minimal viable level and gauge the initial levels of nausea in movement mechanics, scale and the level of information needed on a UI level.

Later playtesting sessions allowed us to do more game balancing and subsequently add more UI features for either players to aid in a better gameplay experience. This included more clear visual and haptic feedback for attack actions taken by the VR player and more responsive ways to use hotkeys as well as the mouse to move fleets of Ghosts for the desktop player.

During the 5 hour showcase at the Creative Computing Show, we had the opportunity to demo our concept level with over 40+ players of various game level experience and background knowledge with VR.

Gameplay lasted anywhere between one minute to 5-10 minutes. The ability to share the gameplay experience with an active spectator audience seeing the gameplay action from the desktop screen really helped attract interest.

Overall we found that a majority of the desktop players who had previous experience in real time strategy games often had an overwhelming advantage over the stationary VR player.

To compensate we added more HP drops for the VR player and a light force field mechanic to stun multiple ghosts at once during a swarming position.

The VR player is equipped with a flashlight on the right to stun ghosts and release light blasts to deflect multiple ghosts around you. The vacuum gun on the left is used to suck up and capture ghosts and droppables like light batteries and bombs to thwart incoming waves of ghosts.

As the RTS player, you have a top down view perspective to control hoards of ghosts to attack the VR Grim Reaper player stationed at the center of the level.

This resulted in an engaging asymmetrical 1 vs. 1 freestyle session that followed a quick snappy party style pace with unique twist on hybrid survival/strategy gameplay mechanics.

Clear constraints are a great springboard for big blue sky thinking and vision building- but to make it actually happen you need to break it down into very basic parts.

As the concept moved from collaborative to competitive, instead of hypothetically talking about features we would dedicate short sprints to create a prototype of that feature and test it out real time.

Adapt and fill in the gaps

Depending on the team sometimes distinct roles and weekly design/coding jams and sprints are more effective in communicating than independent work. There is more accountability, better communication between designers and programmers and real-time testing so that we are all aware of the level of progress at each development phase.

People learn by doing rather than reading

So much of the onboarding was very hands on with 2 people explaining each mechanic to respective players. What we would love to explore further is how to offset cognitive load into the game itself with an onboarding system that it is intuitive for both styles of gameplay regardless of player experience.